It's official! I'm participating in Kendra's Court Ensembles Project  and this is going to be the beauty I'm trying to recreate: 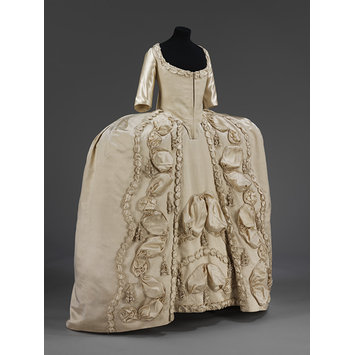 It's british and a bit on the late side, so it's much more "normal" looking, but that's part of the appeal for me - it's something I probably wouldn't have done otherwise, but I could totally wear it to a few local events. (Costume College is just too far away for me, at least for the next two years)

So now I'm looking for the right fabric - it's a silk satin according to the V&A, but I'm thinking about using silk taffeta instead, because the satins I've seen so far didn't appeal to me and at almost double the price of taffeta they'd better at least look prettier. From what I've read so far, taffeta would have been alright - if anyone knows better, please tell me!

First of all, I'll need proper panniers, so far I've only made pocket hoops and a bum pad. I'm thinking about using the diagram from Corsets and Crinolines and altering it, as it's more flared.

In the meantime, the mid-15th century has me in its grip, as I'm off sick for the week and using the time spent on the sofa to hand-sew an overdress. Sewing large amounts of woolen fabric is just really cozy.
Posted by Unknown at 1:25 PM